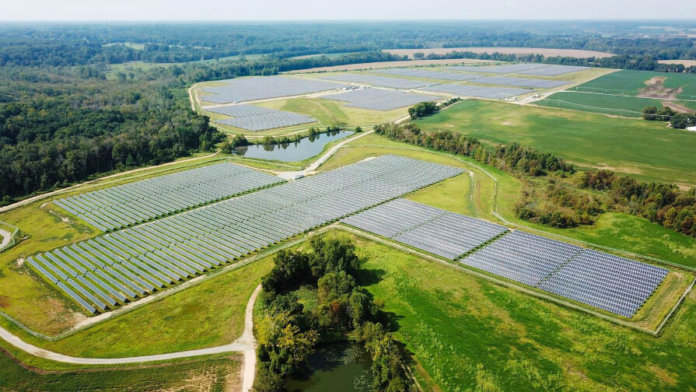 Through a 25-year agreement, UVA and Darden are purchasing the entire output of electricity produced by the 160-acre project, located in King William County. The facility features approximately 65,000 solar panels, enough to power about 4,250 homes at peak output.

The UVA Hollyfield Solar project, which is owned and operated by Dominion Energy, is expected to produce an estimated 17 MW AC of power. Darden School is assuming responsibility for about 25% of the electricity production, which enables the school to achieve its long-term zero-carbon goal, according to a press release from UVA.

“Nearly 10 years ago, Darden established a vision to become a carbon-neutral enterprise by 2020, and with the UVA Hollyfield Solar project now delivering electricity to the grid, the school has achieved that goal,” states Professor Mike Lenox, Darden’s senior associate dean and chief strategy officer.

The UVA Hollyfield Solar project is one of several solar projects in which UVA is involved, the university says. It also has contracted, under a 25-year agreement, to purchase the output of Dominion Energy’s Puller Solar facility, a 15 MW AC project in Middlesex County. The facility is scheduled to come online in November.

The university also has its own solar project, supplying electricity to Clemons Library. Since February 2017, 324 solar panels installed on the library’s roof have been producing what will amount to about 199,600 kWh of electricity per year. This accounts for about 15% of the library’s annual electric draw, says UVA.