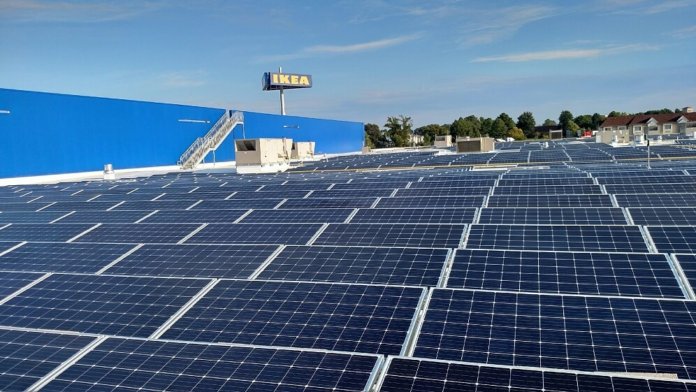 IKEA has announced that its future San Antonio-area store will be equipped with solar panels and electric vehicle (EV) charging stations when it opens in Live Oak, Texas, in winter 2019.

IKEA Live Oak will feature a 245,000-square-foot solar array totaling 1.72 MW. Built with 4,986 panels, it will produce approximately 2,510,000 kWh of electricity annually for the store. For the development, design and installation of the system, IKEA has selected REC Solar.

In addition, the store will have three EV charging stations from Blink Charging Co. There are currently Blink EV charging units at 34 IKEA stores in the U.S.

“We are excited to further our sustainability commitment with the installation of solar panels and electric vehicle charging stations at the future Live Oak store,” says Lars Petersson, IKEA’s U.S. president. “At IKEA, we have a mission to create a better everyday life for the many, and IKEA Live Oak can add to this goal by installing the second-largest solar rooftop array in the San Antonio area.”

This installation will represent the 55th solar project for IKEA in the U.S. and contribute to the company’s solar presence atop nearly 90% of its U.S. locations – with a total generation of more than 56 MW.

IKEA owns and operates each of its solar PV systems atop its buildings – as opposed to a solar lease or power purchase agreement – and globally has allocated $2.5 billion to invest in renewable energy through 2020. Consistent with its goal of being energy-independent by 2020, IKEA has installed more than 750,000 solar panels on buildings across the world and owns approximately 441 wind turbines, including 104 in the U.S.

The 289,000-square-foot IKEA Live Oak store will be built on 31 acres at the southwest corner of Interstate 35 and Loop 1604, approximately 15 miles northeast of downtown San Antonio.