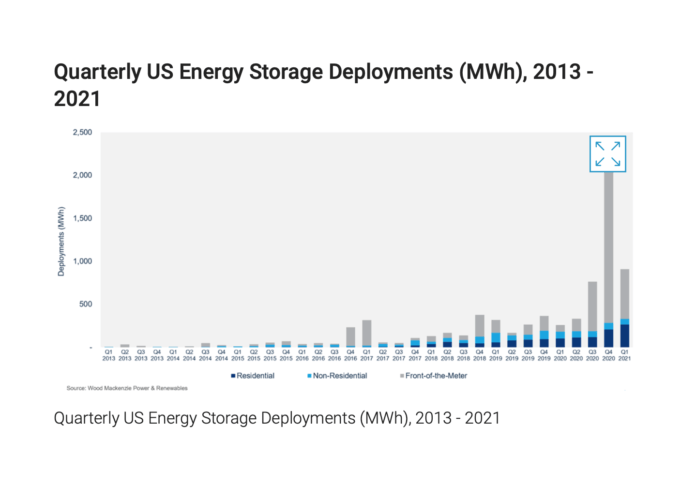 According to Wood Mackenzie, a provider of commercial intelligence for the world’s natural resources sector, and the U.S. Energy Storage Association’s (ESA) latest ‘US Energy Storage Monitor‘ report, 910 MWh of new energy storage systems were brought online in Q1 – an increase of 252% over Q1 of last year, making it the biggest Q1 so far for the U.S. storage market.

Looking ahead to the rest of the year, deployments are expected to accelerate dramatically. Wood Mackenzie forecasts that nearly 12,000 MWh of new storage will be added by the end of the year – three times the amount of new storage added in 2020.

“An extra 20 to 25% growth for the U.S. market over the next five years would supercharge an already fast-growing energy storage market,” says Chloe Holden, energy storage analyst at Wood Mackenzie. “The front-of-the-meter (FTM) segment would see the largest incremental growth, with an extra 6 GW of capacity expected through 2025, which is 25% of our base case market forecast. Without the stand-alone storage ITC, we forecast that the FTM segment will add 3,674 MW this year and 6,915 MW in 2026.”

As noted in the report, the U.S. residential storage market set yet another quarterly record in Q1. The market has grown for nine quarters in a row and broke 100 MW deployed in a single quarter for the first time in Q1. The non-residential market (commercial and community-scale) is not seeing the same growth as other sectors, with between 25 and 35 MW of new projects installed in each of the last five quarters.

The report also notes that the FTM interconnection queue now sits at over 200 GW. Though most projects in the queue will not come online, the queue is the largest it has ever been and is a testament to the rapid growth of the U.S. FTM storage market. There is a clear trend of increased geographic diversity of interest in FTM projects, with a surge of interconnection queue requests sitting outside of incentivized markets.