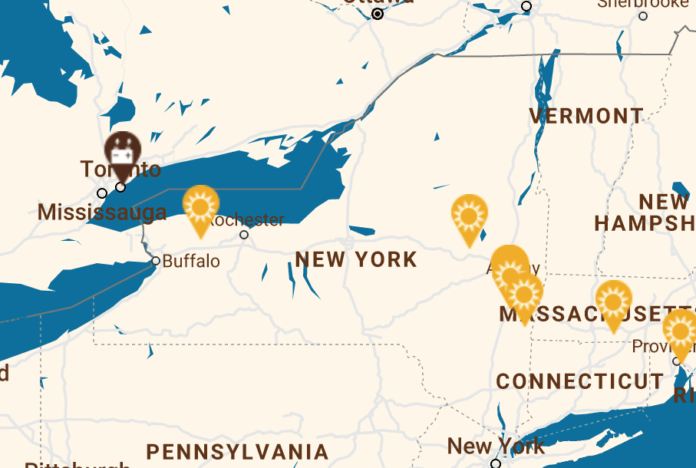 Hecate Energy, a developer of solar farms, wind farms and energy storage projects, has filed an application with the New York State Office of Renewable Energy Siting (ORES) to construct a 500 MW solar farm in the Western New York towns of Elba and Oakfield, representing the first new application to be submitted under the state’s new permitting process for large-scale renewable projects.

If approved and constructed, the Cider Solar Farm would be the largest solar project ever built in the state. The $500 million private infrastructure investment is expected to create over 500 construction jobs and will be capable of supplying 920,000 MWh of renewable electricity per year.

“This project provides a concrete example of the scale and speed with which we must move if we are to meet critical renewable energy goals,” says Harrison Luna, project lead at Hecate. “We are very appreciative of the leadership demonstrated by Elba and Oakfield town governments for this important model project. Our discussions have helped us understand how to plan the project considering the priorities of the communities where we want to become neighbors. Those officials have helped us balance the needs of the communities with the needs of the project.”

New York’s Accelerated Renewable Energy Growth and Community Benefit Act created the new ORES and rules for the permitting of large-scale renewable energy projects. It is intended to enhance the siting and construction of projects that are environmentally responsible, cost-effective and delivered in a timely manner with input from local communities. Hecate’s Cider Solar 94-c application, prepared by Buffalo-based Stantec Consulting Services in coordination with the law firm Foley Hoag LLP, is the first new application submitted to ORES under 94-c regulations, representing an important milestone in the state’s project permitting progress.