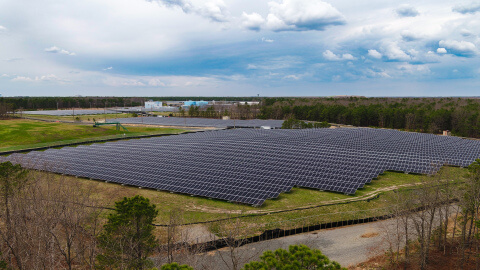 The installation is New Jersey’s largest solar project and the largest solar project built on a Superfund site in the U.S. The array uses a pre-cast ballasted system on approximately 120 acres of the BASF site located on Oak Ridge Parkway in Toms River, N.J., and includes a 27.4 MW grid-connected system and an adjacent 1.5 MW net-metered solar system.

Additionally, EDFR has designed a 5 MW community solar project, also to be built on the BASF site, which will provide lower-cost electricity to area residents, with more than half of its output committed to low- and moderate-income subscribers. This project is still in the approval process.

The solar array was built with attention to the environment, with specific considerations made to improve the threatened Grasshopper Sparrow habitat and protect the Northern Pine Snake. Existing paved areas in the footprint of the project were removed and will be replaced with native meadow mix grasses and wildflowers. Additionally, Rutgers University will conduct a five-year monitoring program to study the ecological uplift of the project.

EDFR served as the EPC contractor for the project, as well as co-developer with PVOne. Goldman Sachs acquired the project from EDFR during the construction phase and plans to manage the asset through its lifetime.