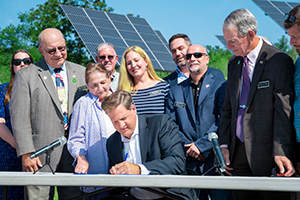 The HB 315 bill raises the limit for municipalities on what’s known as net metering, allowing towns to now generate up to five megawatts of their own power, typically with solar and hydro, in order to lower their energy costs and pass savings on to residents.

The net metering limit was expanded from 1 MW to up to 5 MW for towns to produce their own renewable energy power, which is mainly solar and hydro in the states. The 1 MW cap is still applicable for New Hampshire businesses and homes, reports Annie Ropeik of New Hampshire Public Radio.

Julia Griffin, the town manager for Hanover, told Ropeik that their town had wanted a 1.3 MW solar array that they had been forced to divide into smaller arrays due to the state’s 1 MW cap. “The larger you can make your array and net meter, the less expensive [per] kilowatt hour it is to construct that array if you can put it in one setting, than if you’re building it out across multiple sites or buildings,” Griffin told the New Hampshire Public Radio reporter.